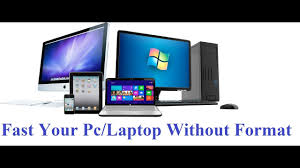 Computers and laptops that are used continuously, they start doing slow work after a time. Many times it comes to the point that the system takes several minutes to boot. Disturbed by this, users make it to the format. However, slowing of the system is not such a big problem for which it can be formatted. We are telling you some simple tips that help users to fast their slow system.

Files that are not of usable users are deleted. In this case, the delete file goes to the system’s recycle bin, i.e. in a garbage bin. That is, the filesystem is not always deleted from the system. There are several files that go into Recycle Bin after deletion. This way the recycle bin is constantly filled because it is part of Windows. In such a way, the delete file is always placed in the drive in which Windows is installed.

For this, users must open the recycle bin and delete all files in it. From here the delete files are always deleted from the system. However, if a user wants to delete a file permanently, he can use the Shift + Delete command. In this case, the files do not go into the recycling bin. Recycle Bin’s icon is present on the desktop.
2.Startups

Many times people install start-up programs more on their system. Doing this reduces the speed of the computer. Those who do not know about start up, let them know that these are programs that automatically turn on when the computer is turned on. It includes programs like Analog Clock, Screen News Feeds, G-Talk, Skype, Bit Torrent, which users often use.

* Go to the Start menu and select run command or click ‘windows key + R’
* Enter “msconfig” in the window which will open and press enter
* From here click on the Start Up tab and remove the programs which do not use them from the list.
3.Keep C drive empty

The C drive is the most important drive in the computer. This part of the hard disk contains all the necessary softwares without which your system will not run. Do not keep too much data in this drive. Install non-essential programs or software in any other drive. Do not keep any Personal Data in C Drive.
4.Graphics Drivers Upgrade for Gaming Computers

If you are fond of HD gaming then a little technical, but the solution for the work can make your slow PC fast. Most gamers are required to upgrade their PC’s drivers. Drivers are special programs that work to run any hardware. Drivers who come in PC are old after a while they buy.

Antivirus is essential because of the virus in today’s time, but according to PC, only one registered antivirus is enough. In such a case, after installing two programs or a different firewall program, the PC slows down. Programs like antivirus or firewalls take lots of power, so if two programs work together then the speed will be reduced.
6.Scan corrupt file

The computer’s operating system always keeps changing system files of the PC. They contain many files that are corrupted after system updates. Such files are not of the work of the user, but still remain in the system. Such files can be deleted or repaired.

To check the corrupt files-
Control panel> programs> uninstall or change programs
got into. After this, “files with file system checking” can be removed from the PC or they can be repaired.
7.Keep hardware carefully

If your PC is too old, then changing the hardware to increase its speed will also be necessary. For example, the RAM of the PC can be increased. Cable can be changed. Many times the ports in the old PC are jammed. If the PC is hanging frequently, then call a technician and get the hardware checked. Check the software once. For example, if you are using Windows XP, you can install Windows 7 or 8 instead.