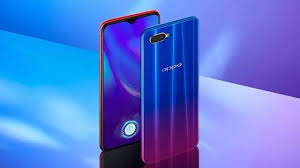 The oppo further intends to expand its online presence, and expects this to be done with the new Oppo K-Series. The company announced the launch of the new series in India on Wednesday with the launch of Oppo K1. Oppo K1 is a very unique phone in sub-RS 20,000 because it only brings an in-display fingerprint sensor but also a AMOLO display.

Oppo K1 specification
The new Oppo K1 has a 6.4-inch Super AMOLED display, whose resolution is 2340 x 1080 pixels and 19.5: 9 aspect ratios. The phone comes with Waterdrop Notch and In-display fingerprint sensor and it comes with facial recognition. On the back side, Oppo K1 has a dual camera, which is horizontally arranged with the LED flash module located on the right. The phone has an Oppo branding dual tone gradient back panel which is inscribed in the center. Under the hood, Qualcomm Snapdragon 660 SoC sits, the same chipset is found on Realme 2 Pro. Chipset for graphics rendering has been added to Adreno 512 GPU. On the software front, this proprietary color runs OS 5.2 based Android 8.1 Oreo. The phone is powered by 3,500 mAh battery. Keeping in mind its price and specs, the new Oppo K1 will compete with the likes of K1 Realme 2 Pro, Mi A2 and Honor 8X, which comes in the same price segment.

• Oppo K1 has launched in India for Rs 16,990
• It is the most affordable phone with in-display fingerprint sensor
• Oppo K1 also has a WaterDrop AMOLED display and a powerful Snapdragon 660 chipset