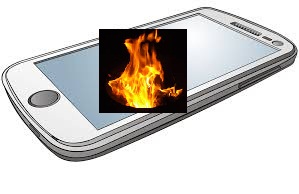 Many users are forcing the problem of charging or heating of smartphones during the calling. The number of users of the phone is so much heat that there is a fear of being blasted. The problem of heat also comes mostly in Chinese smartphones. However, some Chinese companies have fewer heat. Well, due to the heat of the phone, there are some mistakes made by the user many times.

We are telling similar mistakes and their solutions.

1. Charging the phone for several hours
2. Calling during charging
3. Playing online games
4. Put the hot spots on several hours
In addition, there are some reasons why the phone may be heated, which the user does not know, like –

Phone heating when charging:
If the heat is charged during the phone charging and late charging, then replace the charger first. Keep in mind that use the original charger only. Even after this there is no problem solvable, then charge from another power board. If the phone is still being heated, then maybe there will be a problem in his battery. In such a situation, you should buy the second Original Battery.
Old phone heating:
Those phones that become 1-2 years old, often start to cause heat problems. However, they do not necessarily have a fault in their phone. First of all check their software updates. If an update is coming, install it immediately. Many updates are solvable due to phone updates.
Heat in Multitasking:
Many times the phone is quickly heated when we play it online games. This means that overloaded on the phone. That is, running multiple apps together on it. Many times the applications remain open in the phone’s background, which are connected to the Internet. In such a case, if the phone is low in RAM, then it is a heat during multitasking. In this way you can close all the apps during the game.
Being Heat During Browsing:
If you are browsing the phone and the phone is heated during this time, then for that you have to make some changes in the settings of the browser. Browsers have features such as Data Saving and Data Compress. They should always be kept on. This reduces the problem of phone heat becoming. In addition, Internet data is also saved.
Battery aging:
If your phone is 2 years old then it can also be a problem battery to be heated. According to Tech Experts, after 2 years, the battery backup of the phone starts diminishing. Also, it takes time to be fully charged. Being engaged on long-term charging is also a heat. In such a situation it is necessary to replace the battery of the phone.

Being Heat in Live Streaming:
When the phone is being heated during the video streaming or online music, its big area phone is less RAM or processor. It is important to not keep HD quality video during live streaming. The HD quality will definitely heat the phone. Similarly, the user should save the song in the phone instead of online music.
Being Heat During Calling:
The problem of calling a phone during calling is done by many users. However, these problems are due to the phone’s hardware. Phones whose prices are low and have more features, then their hardware is weak compared to other phones. Also, the quality of the battery is not even better. This is the reason that when the battery is used for long periods of time it starts getting heated. For this, the user should reset his phone after some time.
Being Heat With Memory Full:
When the space is low in the internal memory of the phone or the memory card, then its effect is also on the phone. That is, it starts to heat. In such a situation, it is important to always keep the phone’s cache clean. Keep removing the phone’s temp file as well. Also, such apps are not for your work, they are deleted from the phone immediately.